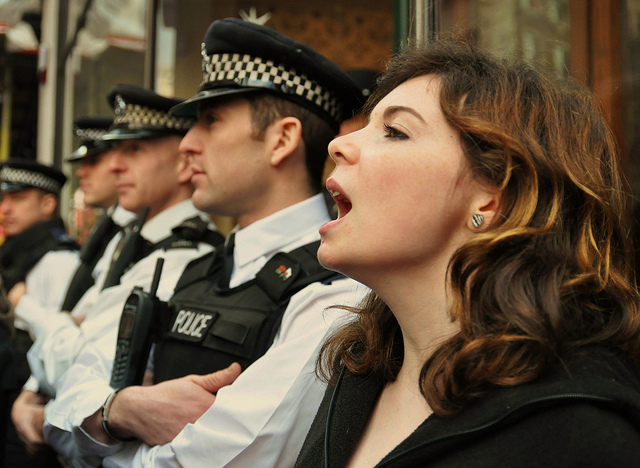 Determining which party is initiating force is a fundamental (but not insurmountable) problem with political theory based on non-initiation of aggression.  “Voluntary prior consent” to the right being enforced may be one of the better ways to approach the problem.

For example, suppose that Aperson voluntarily assents to the proposition that murderers should be imprisoned by a community policing collective (CPC), and further voluntarily joins this entity, which taxes its members. If she refuses to pay her taxes while positioning herself to receive services that the CPC provides only to its members, she commits the aggression of theft of services.  Likewise, if she murders someone and then refuses to submit to imprisonment once proven guilty, her refusal to accept the punishment she deemed just adds to her aggression of murder.

On the other hand, if Beeperson has not voluntarily joined the CPC, it would not be aggression on his part to refuse to pay CPC taxes presuming he did not willfully to seek to benefit from CPC services without mutually agreed payment.  Likewise unless he had voluntarily assented to imprisonment by the CPC for murdering one of its members, if he murders someone he does not add to his murderous aggression by refusing to be imprisoned by the CPC for it.

When a CPC claims a monopoly  on the use of force in a territory, no one is allowed the choice to voluntarily exist and trade with inhabitants in a particular territory without submitting to all of the extant monopoly’s rules and demands.  Therefore even if Aperson thinks she has voluntarily agreed to follow all of the reigning monopoly’s rules and demands, her “choice” is indistinguishable from the “choice” of a slave on a plantation to not be “uppity.”  There can be no voluntary compliance without real choice, because voluntary means to choose without being coerced.  Real choice means non-coerced choice, and eliminating coercion requires allowing the one who chooses freedom of action without existentially adverse consequences.

The foregoing implies that there is something special about the right to exist in an area and to trade freely while doing so.  These freedoms can be recognized as fundamental human rights without denying the possibility of trespass or other special situations that might restrain trade at certain times or circumstances.  While this is a topic that deserves further treatment, suffice it to say for now that any U.S. government that denied the fundamental right to life, liberty and the pursuit of happiness would be in opposition to its founding documents, and in that sense illegitimate.